So, I have always had some sort of learning disability. I grew up with several whammies. I am not asking for a pity party here, I am not griping. I just want to explain a few things.

When I was in first grade in the 70s, I was in a special education reading group. Later, in the 80s in elementary school, a new thing was found called "ADD." It was assumed only boys had it, because they couldn't sit still in school.

Fast forward to present day, some time in the last 5 years. I found out that I have ADHD. I tried a medicine. It helped a tiny bit a few different days. It's also possible I was more rested on those days or something. I don't really know.

Well, I learned in this last month that vision issues I have translate into symptoms the look like ADHD. The visual clutter I deal with on a daily basis because I see double, things look like a rocking ship so much of the time, my tunnel vision the overwhelm I have, the suppression I have.... it all has me just so overwhelmed that it looks like I have ADHD.

It is interesting to think that perhaps my ADHD-presenting issues have to do with my eye problems.

One of the symptoms that could have been noticed as I grew up, had the tools readily existed for diagnosis, is that while I am smart and score high on an IQ test, I have severe difficulty in learning. Particularly with written information. I cannot learn poetry or vocabulary or spelling easily. It's all been a rough road for me. It's all because I simply can't bring information to my brain the same way that someone with normal, common, healthy vision can.

I read that "we bring in the information with our eyes, but we actually see with our brains." We might be looking at a large object, realize it's silver, it has a certain shape and contour. We process the 3D structure of it and realize we are looking at an airplane. Our brain sorted all of that out quite easily.

My brain would take in two very large objects, try to overlay them on top of each other (and miss by a few inches, so part of it is blurred out - since it's a plane, a large part of it is blurred out). The whole thing is rocking in a U-shape as I switch from eye to eye. The right side of the plane is overplayed to the left because my eyes are slightly crossed. I can figure out the color when I think about it, then the contour may be a bit tricky to discern.

No joke; my optometrist, Dr. Magic, showed me a picture of a tiger with yellow lines on it. I had on glasses that had a yellow lens and a gray lens. I never did see the left side of the tiger. I couldn't figure out what I was looking at. He asked me, "what do you see?" Finally, I could make out that it was an animal. Then I could see the shape of the tail. I saw the rear end and the shape of the tail coming off the rear of the tiger really well. Finally, I was able to say, "I think it's a tiger." And I described the wonky way the yellow lines showed. I am not sure what an ideal, healthy pair of eyes would see. I just know what I saw and described. 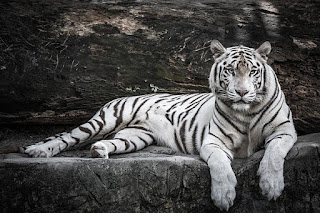 [A photo of a white tiger with black stripes. The tiger is looking at the camera as he lounges on a concrete slab. Behind him is an earthen scene of dark gray and dirt colors.]
I asked him, the next week, if I could please see that picture again, of the tiger. I think he didn't understand what I was asking until I talked about the yellow lines. Then he was able to get it out of his collection and show it to me easily. I put the glasses on and off. I realized that it wasn't a tiger. It was a lion! I realized it was one picture with yellow lines on it; not two pictures as I had thought the first time I saw it.

It was a lion. It had a mane and everything. But all week, I had talked about this wonky tiger picture to people, trying to make sense of the odd way I saw the yellow lines.

I am writing this blog to help others who may have visual challenges too. Maybe they will see some of their symptoms in me, and will find comfort in knowing that there is help for them to get healing for their eyes too.

Thank you so much for reading. I welcome your comments at the bottom of my blog posts.
at September 27, 2019 No comments:

Tape on my glasses

When I was a little girl, I got a blue pair of Wonder Woman glasses. Because I was diagnosed with a "Lazy Eye," (one eye wandering, while the other eye stays focussed on what I am looking at) the eye doctor put tape on the outside of my glasses. This was supposed to draw my eye back in because it would be looking through blurry tape and not seeing clearly. I haven't had those kid glasses since the early 80s. So I re-created what I'm talking about on my brand new pair of glasses. 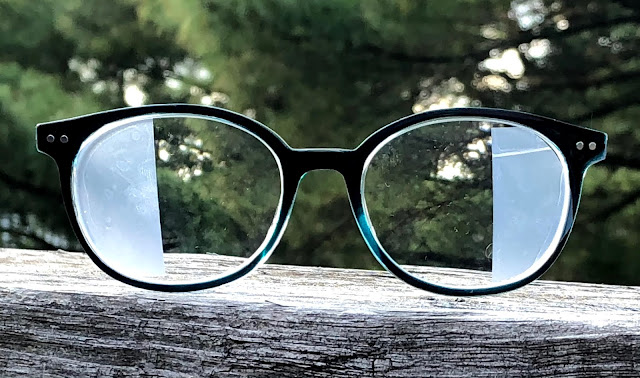 I walked around for years wearing scotch tape on my glasses. So many people asked me, "why do you have tape on your glasses?" "Did your glasses break?" I was horribly embarrassed by this. I would answer confidently that I had a lazy eye and it was supposed to help me see better.

I went to my new eye doctor, who in this blog I am going to refer to as Dr. Magic, for the first time 2 weeks ago. On my second visit, he asked me to look at him and tell him what I saw. I told him he was moving in a "U" shape. And I indicated that with my arm.

He nodded and proceeded to put tape on my glasses. When he was done, they looked like this. (I took this photo - I always set them on the table upside down. So, they are upside down.) They are sitting on top of one of my many notebooks. This is my own artwork as the cover of the notebook. 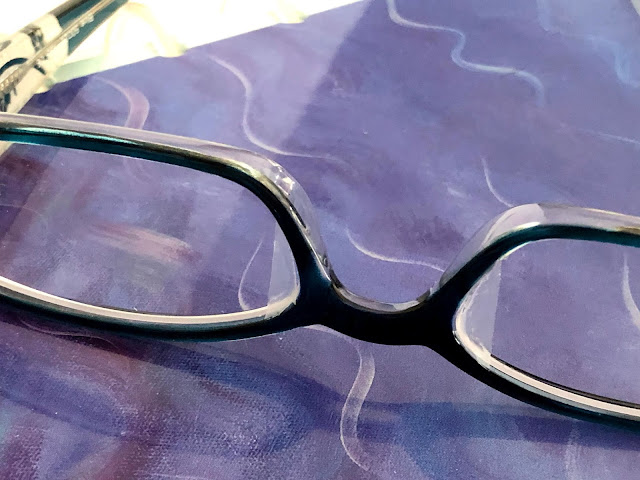 Well, he handed the glasses back to me with the tape barely on the inside of my eyes. "That's unusual," I thought.

I put the glasses on and I looked at him. He asked me "what changed?"

I looked at him for quite a while. Then I said, "you're not moving anymore!"

It was exciting and also a bit weird. I hadn't really noticed that every time I looked at something, it was always flickering back and forth and rocking in "U" shape.

This simple fix made my life go from a moving ship to stillness. Wow. 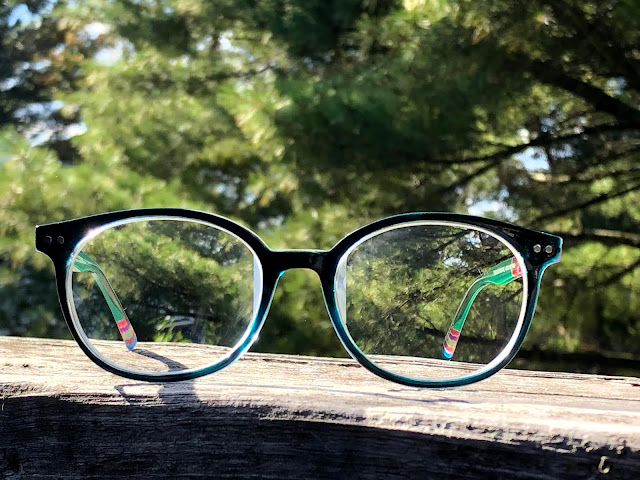 Thank you for visiting my blog!

I just want to mention that my blog isn't live yet. I haven't officially "launched" it.

So! Way to go being a trend-setter - visiting my blog!!

Thank you for being here already!!!!!

Prunes on my nose

In one of the skits, someone sat down next to her on that bench. They were chatting about who knows what. The other person kept pushing their glasses back up on their nose. Finally, they asked the lady, "I see you don't push your glasses up your nose constantly. How come?"

The main character lady said, "I used to always push my glasses up on my nose, but I got tired of it, so I solved the problem."

The visiting character said, "How?"

The main character lady said, "I used prunes." And she showed how, underneath her nose piece of her glasses, she had two prunes. One on either side of her nose.

My dad and I saw that skit together. He thought it was brilliantly, wackily funny. I agree.

My new glasses keep slipping down my nose. I love wearing them because they are actually helping me see better!! But I am getting tired of constantly shoving them up my nose.

Maybe I need to get a pair of prunes.