So, I have mentioned here before that I see in 2 dimensions. My eyes have never worked together, for as long as I can remember. I flicker between them very rapidly. As a result, I take in at least twice the information that everyone else takes in, and my brain has to make sense of it all.

Well, so I remember years ago, probably in 1984, seeing Vincent Van Gogh's paintings of his room and the cafe, and I thought to myself: "of COURSE he painted them that way, that's how he saw them." Because that's how I see things. 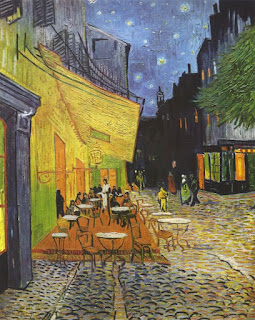 It turns out other people look at me in constant perplexity and cannot understand what I mean when I say that I see things in 2 dimensions.

You know how when you go to the movies, and you see a nice movie. Let's say: Star Wars. It has ships and motion and people talking. And it's all on a flat screen. That's how I see things. 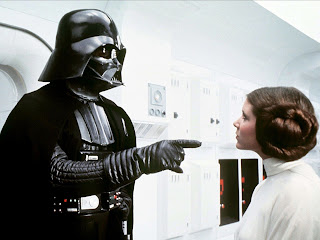 Then you can go to the exact same movie, and wear those 3D glasses, and suddenly, those ships are flying toward you. Maybe Darth Vader and Princess Lea are talking and they are closer to you than the background is. This is how I feel like the rest of the world must see things.

I don't see in 3D unless I am wearing special glasses, like the ones given in the movie theater. Those glasses have a certain way of bending light and such, to force a fake 3D image. They force your eyes to take in images as a 3D image, even though it's actually flat.

Anyway, so several weeks ago, I was sitting on my toilet (yes, I do that sometimes, don't make a big deal out of it), and I looked at the orange towel that one of my boys had haphazardly hung up on the rack. I stared at it. I realized it looked 3D to me. I could see the part that was folded and sticking out toward me - as if it was 3D.

I've NEVER seen 3D before that with my own eyes. I just wanted to sit there and stare at the stupid towel. Sloppily hung.

That week, I went in and told my vision therapist, A, about the towel. She was thrilled for me! She loves hearing my progress. She is working so hard with various kinds of prism glasses (I have previously typed this as prizm with a "z" and I don't have the energy to go back and fix my posts, but I have been corrected that this technology is spelled with an "s," and not a "z.")

I have caught one other glimpse of 3D in the "real" world somewhere else, since that towel. But I don't see it all the time, every day.

An interesting note .... as I typed this blog post, I have had my left eye shut. I just can't take in all that extra information. Reading and typing (typing while trying to loosely proofread my own stuff), I do this with 1 eye shut.

I look forward to having both of my eyes work together. I feel like life will be so much more easy and efficient for me, instead of so exhausting and trying every day, every moment, as soon as my eyes work the way they are supposed to.