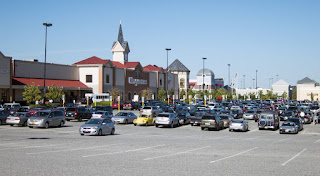 Approximately 20 years ago, I asked a friend to figure out which of the cars in the parking lot was my newsd car. (New for me but a used car = Newsd. I know, so clever.) He pointed straight away at my car and said, "well, it couldn't be that one." But then he had no other ideas for which one it might be.
Standing there, staring at all the cars, I finally asked him, "what made you point at that one and say, 'it couldn't be that one.'?" He said, "because it has an out-of-state license plate." I also wondered why he would have even thought to LOOK at that one - and somehow, in the conversation, he pointed out that it was the only car that was parked crooked.
I finally told him: "that is my new car." Yes, it had out of state license plates, but they were soon fixed. I got it registered and such. This friend, in the conversation, pointed out to me for the first time (I had never known this about myself!) that I parked crooked.
I had no idea I consistently parked crooked. I was completely clueless. I also was never able to correct it.
So, a few months ago I arrived at vision therapy and had a chuckle. Of the 20 or so cars in the lot, almost all of them were parked crooked. I felt like "this is my community." I had a good chuckle about that at the time.
Well, about a week or two ago, I noticed that I was now parking badly, but in a whole new way. I don't think I still park crooked. I haven't checked that out specifically. But I noticed that suddenly, I keep parking about 3 feet back of where I normally have always parked.
It's like if the parking space has the white lines in the front with a cement block you're not supposed to hit with the underside of your bumper .... over the years, I have usually gotten almost to that bumper or else have hit it, and then backed up a little, listening to my bumper drag back off of it. It makes me cringe, but it's the best I have been able to do. *oops*
Well, last week or maybe it was the week before, I have discovered that I am now parking 3 feet away from this sort of phenomenon. I think I have pulled all the way up to it and done just fine. But - it turns out - I am still 3 feet short of the top (?) of the parking space! Consistently! I park my car every day in my garage. It's a very deep garage. It could easily accommodate 2 cars parked back bumper to front bumper. (Not a 2 car garage with 2 doors in front; but 2 cars could fit in the one door. It's a deep garage, not a wide garage.)
My dad's stuff is mostly in the back half of the garage. I need to go through it and pick and choose what I want to keep and what needs to go. I haven't gotten around to it, but I will. But I have consistently been able to park in the garage, and pull up to the spot just before my dad's stuff. This leaves me about 4 feet of clearance behind my car, before the garage door. I don't need all that distance, but that's what I have been doing.
Well, suddenly, I now park nearly with my back bumper at the garage door. I don't know what happened. But my vision / distance / judgement is all askew from how it's been. It turns out, I have been learning, that I am starting to perceive depth.
Things are starting to look different to me. it's been very gradual for me. But I no longer am able to use the visual queues around me the way I used to. And it's consistent enough now, that I am parking 3 feet shallow of where I actually intend to park. I have been paying attention to this, this week, and it is still consistent.
I think I may need to go to an empty parking lot and start parking and parking and parking. Drive and park. Drive and park. Over and over, and re-learn how to park.
One last thing - just because. My grandparents had a tennis ball hanging from their garage ceiling, on a string. They had a very long station wagon "back in the day," and they wanted to park it "just so" in their garage. It was hard to get the car in just the right spot. So, one time, they pulled it in, determined it was just how they wanted it. And then the climbed up into the attic or the rafters or whatever (I know there was an attic up there) and they hung down a tennis ball. Now, every time they parked that car, they would drive up to the tennis ball. The ball would very gently tap their windshield, and they would know that they were perfectly parked.
I have been thinking about such a tennis ball these last 2 or 3 weeks. Every time I get out of my car and see that I am still parking shallow. I won't be taking the time and effort it requires to figure out how to get up to the rafters of my garage to hang a tennis ball. But - it jumps in my head now and then to think about this. Just something else amusing going on in my head."
at March 30, 2020

Email ThisBlogThis!Share to TwitterShare to FacebookShare to Pinterest
Labels: Driving, Park the car