I want to quickly mention that my usual Vision Therapist, A, has had me hold a stick - maybe like a bamboo rain stick - and has changed the prism glasses on me and asked me, "does it feel straight or curved?" She has done this for weeks now.

Each time my brain, my eyes and my brain again FIGHT to figure out the answer. I know it's straight. Or do I? Have I ever seen this particular stick with my glasses off? Is it straight? I don't know!

I touch it and wonder. I always answer, "I don't know." I think one time I said, "I think it's curved." And she was so happy about that, but didn't elaborate. Like I said, I think they do things here to help me but don't always want to tell me exactly what they're doing - so the help will flow out organically and on its own timeline, rather than trying to force results by "cheating" and telling me what I'm supposed to think and feel about something.

Well, so after I completely walked across the room (as told in the previous blog post) twice, with the distortion glasses on, my vision therapist, C, put 3D glasses on me. Over my own pair of glasses. He put two traffic cones on the floor - one on either side of me. These are standard size, standard height, traffic cones. 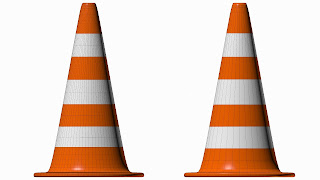 In front of me, he put a white pole with a magnet holding up a 3D image of a donut shape. 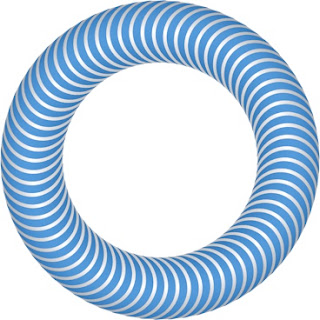 The donut shape is actually printed on two translucent sheets of plastic. The two sheets of plastic can be widened and narrowed, to change how the 3D image of the donut appears. Is it behind the cards? Is it in front of the cards? Is it 3 feet from you? Is it 12 feet from you? It's a nifty piece of simple technology to be able to create this illusion.

Well, then I was to keep looking at the donut and walk to my left, around the cone to my left, and circle it, then walk to the other cone (originally to my right), around it the other way. Essentially, my feet were making an infinity symbol around the traffic cones.

My task was to continue walking in this fashion, around the cones, as I continued to stare at the 3D donut vision.

I did this a bunch of times -- walking between and around the cones, staring at the donut, keeping it as a 3D image in view.

After a bit of time, my vision therapist said, "You're doing a LOT of work here." Funny, it didn't actually FEEL like a lot of work.

But he explained to me that the view of the 3D image kept changing in perspective to where I was. I had to hold it as a 3D image - which meant that my eyes were keeping focused on a moving target, and continuing to work together as the target moved, and keep it as a 3D image. Wow! He was right! My eyes WERE doing a lot of work!

He decided, "that's probably enough work for today." I swear these vision therapists are trained to see when their client / patient is tired and worn down from work. I don't usually feel worn down, but they are kind and tell me to take breaks. They can see I am tired.

He and I went and sat down at the table to close out my session.

I looked at him. He was writing notes and then he looked at me.

I realized - this man was sitting across a table from me, maybe 3 feet away from me. And - WOAH:

The WALL behind him was FAR BEHIND HIM!

This was a MIRACLE for me. I was seeing in 3D for the first time ever in my whole life. I could see the negative space as it looked like air, in between him and the wall behind him.

I know I am repeating myself here - but - It was a miracle!

I told him: "I can see you, so close to me, and that wall behind you is REALLY FAR behind you!"

The surprise on my face was probably very clear, and he knew that I was seeing in 3D for the first time. He felt so close to me, I felt like I had to scoot my chair back. My personal space felt invaded, though I have sat across that table from him and from other vision therapists before.

I walked to the waiting room. The hallway was LONG. The ceiling was CLOSE. I finally got to the busier than usual waiting room. A lot was going on. Dr. Davis was meeting a new patient - a little girl. He is so funny. He asked her, "did you bring both of your eyeballs with you today?" And she giggled and hugged him.

Another vision therapist, M, was explaining something to the parent of a teen boy who I often see in vision therapy with me. I tried what she said and it was crazy cool. I will type THAT in another post ....

I sat there and stared at the ceiling, the walls, the people in the room. There was a military man in uniform there. I looked at his boots. Everything was new and in 3D for me. I was in complete shock. This was a complete shock to my system.

I couldn't take the (very nice) ruckus in the waiting room anymore, so I gently got up from my chair and went out the front door. There are trees outside and holy cow, they had limbs coming towards me! I could see the parking lot, the tree across the parking lot, and the building way off in the distance. It was all in 3D.

I walked so slowly to my car. Everything was different. My entire world had changed!

Driving home was interesting. I kept slowing down for things. I thought they were way closer to me than they actually were. It reminded me how I have been parking 3 feet farther away from where I intend to park. My eyes must have already been starting to make this leap to 3D vision, but it was subtle and I didn't see it clearly until after this exercise with the traffic cones.

There is so much I want to share and type, and yet, the blog posts are too long already.

I may have to do a part 3 to this blog post. My whole world changed for nearly 24 hours, and I have only shared about an hour of it with you.

Thank you for reading my blog. Please leave me some comments. I love comments and feedback.

I haven't yet figured out why the comments turn off after a few weeks on the blog. I want them to always work, but I haven't figured that out yet. I'll get there. To misquote Bob Dylan: "My world, it is a'changing."