The things we teach kids

You see, she’s learning to read. In kindergarten, no less. When I was a kid we didn’t learn to read until first grade. Indeed, I went to school with a kid named Johnny who never learned how to read at all. Rudolph Flesch wrote a book about him.

“Hug?” I replied, hoping to change the subject.

“What does O-F spell” she repeated.

I HAD HOPED that they wouldn’t start teaching reading until first grade. I was looking forward to at least one more year of peace and quiet.

What in the dickens do these teachers think they’re doing, teaching kids to read at age five-and-a-half? Shouldn’t youngsters be spending more time watching television? Like adults do?

BENJAMIN Franklin wrote something in his autobiography about how he learned to read when he was about three years old. But then, what else was there for kids to do in those days? Donnie and Marie hadn’t even learned to skate back then.

“What does O’F’F’F spell,” she asked, putting an extra emphasis on the last “F.”

“It’s not a book. I’m writing a letter and I wanted to know what I wrote.”

“Why don’t you send it to them and let them read it? It isn’t nice for me to read other people’s mail.”

“Oooooooof,” I said, pretending someone had just slugged me in the stomach. She thought that was funny and laughed very hard. That’s what I like about kids. They laugh at my jokes. Sometimes.

I WAS READING a study the other day that said children shouldn’t be encouraged to read too soon. Sometimes it isn’t good for them. It makes them smarter than their parents before they reach eight years old. I agree with that study.

“Daddy, tell the TRUTH,” she said, mimicking me perfectly.

At least it felt good to be able to come up with an original joke she hadn’t heard. It’s usually the other way around.

For example, the other week she asked me, “What time is it when an elephant sits on a chair?” 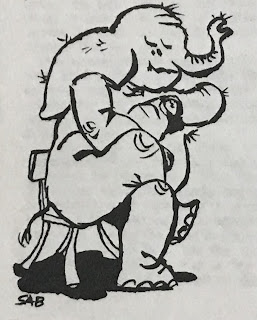 Now what kind of question is that? I took a wild guess. “Time for the circus to start?”

Broke me up, too.

SO I THOUGHT I’d try one. She started it, after all.

“Okay, what’s black and white and red all over?”

“A zebra that fell in the ketchup.”

It wasn’t exactly the answer I was looking for. She probably read it in a book somewhere. Certainly not in a newspaper. We don’t put jokes like that in the newspaper. So I turned to her and asked, “Where’d you ever get a dumb answer like that?”

Guess who turned red all over. Not the zebra.

This article originally ran under “Crump’s Corner” in The Princeton Packet newspaper. I was 5 1/2 years old at the time, as the article alludes to me having just started Kindergarten. I hand typed this from the file my dad kept, but unlike most of what he kept, there is no date on when the article first ran.