One thing I want to do with this blog is to share the way I see things. Not just with my eyes - but life in general. This post is such a post. 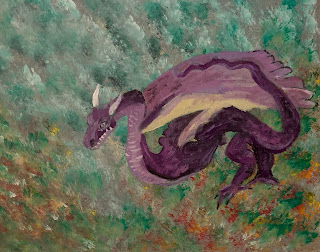 [This is an unfinished painting I did many years ago, of a purple dragon on a misty - impressionistic looking background of smoky gray and mostly shades of green.]

I feel like there is a classic story somewhere - probably a Grimm's Fairy Tale story - that goes like this:

He would snarl and yell at people who came near his gold pile. He didn't want to lose any of it. He counted his gold day and night and was obsessed with it, more than anything else, he loved his gold.

One morning, he woke up. A noise behind him startled him and he startled awake and tried to run away. He saw huge monster feet surrounding him! He thought, "oh my gosh, I have a monster behind me! I need to run faster!" As he ran faster, the monster feet kept pace with him. The prince was so scared.

Finally, he thought, "I can't run any more, I am so worn out." So he thought "this is it, I'm going to be eaten." He stopped to rest and turned to face the monster. And, then he realized: it was HE who was the monster. Those monster feet that had been following him were his own feet.

The prince had turned into a dragon. This is the legend of why dragons guard gold. They were once handsome and kind. But they value their money and gold more than anything else. More than people, more than music, more than the world, more than anything. And they turn old and scaly and breathe fire to keep people away from stealing their gold.

Their heart turns as cold as stone, their body cold. Their breath - hot and fiery.

Maybe at some point I will find that story and share the link to the actual fairy tale. I have retold it as I remember it, from reading it as a child.

I see people (and in this case, I not only mean "people," I also mean "corporations" and even "banks," and more than that, too) these days doing the same thing - guarding their money to the extent of excluding all else.

The cruelty that happens because someone is guarding their money can be exceedingly hurtful.

Think of rich people exploiting their workers. It's an age-old tale. I remember the story of the Serfs in Russia being exploited by their masters. Or the slaves in the United States of America being exploited by their masters. Or the modern day prisoners who are stuck making plastic utensils (forks, knives, spoons, sporks) all day for probably 10 cents per day so we can get it when we order cheap Chinese takeout, rather than have to bother washing our own utensils.

I see these kinds of examples so often, and it breaks my heart. I don't know what to do about it. I guess, with this blog post, this is my one step forward - letting people know about the story and how it can apply to today.

I have just felt compelled to share this on my blog, because it's How I See Things.

I would like to encourage you to wake up. Perhaps many of my blog readers already have. But we are coming up on the holiday season. So many people think the holiday season is about buying each other gifts, or giving money to their family. Or what-have-you.

I would like to encourage everyone to step back and think about Cindy Lou Who from the Dr. Seuss story "How the Grinch Stole Christmas." Cindy Lou Who has the idea that Christmas doesn't come from a store. Christmas is more about being together. Let's spend time enjoying each other. Let's listen when. someone is talking. Let's listen to that relative at the table who holds the opposite opinion of you and is boldly loud about it. Let's kindly encourage them to also open their ears to listen to you, too.

And now, for a small tangent ... because my brain works like this.

I believe we have all been taught, growing up: "Don't discuss religion, or politics." Where has that gotten us as a country? It's gotten us arguing and yelling at each other. And yet, it's the greed of corporations that is hurting us. Vote with your dollars. Industries are changing already because people are changing their spending habits. The one I saw changing the day before I wrote this post is about the dairy industry having to start figuring out something else, because more people are buying non-cow milk. (Yes, I call it "cow milk.") I haven't been able to drink cow-milk since 1988 when I finally figured out that it was the cow milk that hurt my stomach so badly. Soy was the only option back then. But now there is almond, cashew, cashew with banana, soy, coconut, hemp, and even the new thing I don't want to try - oat milk :::shudder:::.

People are voting for non-cow-milk with their dollars.

I may or may not have mentioned it yet, but I want to let you know that I am a Quaker. Yep. I am a modern day Quaker. No, it has nothing to do with the oatmeal. The modern day Quakers that I have met, do a lot of research to figure out which companies are the most responsible with the way they do things. Do they use child labor to produce their products? Do they ship from the other side of the world, rather than produce close to where they sell from? How sustainable - long term - are their practices? How much water is consumed to make such a product? Is the price reasonable, too? Quakers often vote with their dollars.

I could go on and on about how the Quakers think and are socially responsible. I probably will, over time, on this blog. But it is the Quaker inside me that is starting to put 2 and 2 together, and realize that the corporations and individuals who hoard their gold turn in to something that resembles Gollum from "The Lord of the Rings." I don't want to resemble that. I don't want to cherish a material object more than anything else. The very idea disgusts me. As I thought about this more and more, I remembered the allegory of the prince who guarded his gold and eventually became a dragon.

Anyway, food for thought here on my blog - it's How I See Things.