I am a dog walker now. The company I work for has a nice app where you tap "arrive," it tracks your walk via GPS, you can take pix of the dogs you walk and upload them, and then you tap "finish."

Last week, I had just finished walking a dog. I tapped "finish," and I was glancing at a photo of the dog I had just taken, to see if it was cute enough. And I walked straight into this staircase. 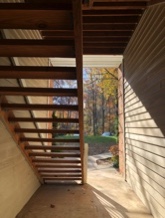 I was stunned for a moment. I was angry at myself. And then I realized I might fall over, so I went and leaned on the wall to the right and just stood there, crying.

I eventually drove myself to a local doc-in-the-box. They asked me a bunch of questions. I don't remember them all, but one was, "do you have double vision?" I said, "I always have double vision." She said, "is it worse?"

I looked at her, examined her face and realized: "yes, it's worse."

Of all the concussions I have had, this was the smallest one by far. Having said that, it's a week later as I type this, and my head still hurts.

At the third location they gave me a CT-scan. They determined that my brain looked ok and it wasn't bleeding. So that's very good.

Then they told me:

"Don't drive until all the symptoms are gone."

Yeah. Like I have a choice about that. I will just have my chauffeur drive me places until I feel better. ... That's a joke. Hopefully it's an obvious one. I most definitely do NOT have a chauffeur.

There is so much I want to say about this, but the thoughts in my head are so jumbled. So, I will write more in future blog posts.