When I got home and had a chance to just lie down in my bed and stare up at the ceiling, my ceiling was also 3D.

Now, our ceilings have that 1970s popcorn look to them. I pretend they look like daisies so I don't see it as ugly like I would if it was just the stipple effect with no pattern.

Well, so usually, the ceiling looks like it's well above my head. I guess we have 8 feet ceilings, though we haven't measured them. My 6 feet tall kids can reach them, but I can't. So I am guessing they are about 8 feet tall ceilings.

Usually, I know a ceiling is there but I don't pay much attention to it.

This whole idea reminds me of a scene in the movie "Blast from the Past" with Alicia Silverstone and Brendan Fraser. 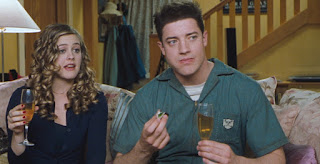 [Photo of Eve (Alicia Silverstone) and Adam (Brendan Fraser) sitting on a couch, sipping champagne and eating sushi) from https://bombreport.com/wp-content/uploads/2019/02/blast-from-past.jpg]

Brendan Fraser plays a character named "Adam" in the movie, and he has just shown up at Alicia's (Eve's) house. Adam is in a room with Eve's roommate, Troy. Adam looks up at the ceiling and tells Troy, "You have nice ceilings."

Troy says, "You like ceilings?" and has a perplexed look on his face.

Adam says, "Not particularly." He looks happy as he says it. It is just an amusing little scene in the movie. If you haven't seen that movie, see it. It's such a fun movie.

Back to my own ceilings. ... Well, my bed is standard height. I looked up at the ceiling and I felt like it was 3 feet away from me. I felt as if the ceiling was going to crush me. It was a bizarre feeling: to have cognitive dissonance about my ceiling.

Cognitive dissonance is something that means "two opposite thoughts held at the same time in your head." I know that the ceiling won't crush me. I know it's not falling. I know it's not just 3 feet away from me. But it looks like it's falling on me and that if I stand up, I will bump my head on it.

It was scary, and part of me said that I wanted to move RIGHT THEN - to a place with cathedral ceilings. It's very bizarre when you feel like your home is going to crush you.

Maybe I am in a movie kind of mood, but now I am remembering the scene from Star Wars: A New Hope, when the walls of the trash compactor threaten the heros of the movie.

I tried rolling over, I tried looking at a farther part of the ceiling. The whole thing was just really weird and a bit unnerving. I wasn't a fan.

Eventually, I went to sleep.

I woke up the next morning and could still see in 3D!

I took dogs on walks and enjoyed the new spring blossoms on the trees. It was interesting knowing when to dodge tree limbs rather than walk right into them, like I usually have in the past. I was grateful for that new skill!

About mid-afternoon, my eyes got very tired and felt like the muscles had been working too hard, and my eyes slipped back to normal. I was back to seeing the way I normally see.

The next day, I tried aligning my eyes again, to see if I could do the 3D thing again. The muscles in my eyes hurt when I tried. They had been overworked and needed a rest.

I thought perhaps that the next week at Vision Therapy, we would do the same thing and I would be able to get the magic 3D vision back, but we didn't.

My usual therapist, A, was there, and she is so gentle and calm with me. Her entire objective with me is to help me feel safe. She is exceptionally good at it. She is progressing slowly with me. It occurred to me that I just wasn't ready yet to see in 3D, since it made me feel like my house was crushing me.

Case in point - I can now park my car straight. Just in time to not be driving anywhere anymore thanks to Covid-19. I guess that's what "they" call "irony." Who? I don't know. Just "they."

It's true - a few weeks ago I went on one of my last grocery shopping trips before quarantining myself for what I think is now 6 weeks or more. (I have lost track.) And I got out of the car. I felt like perhaps my car was in the space differently, so I walked around my car and looked at it from all the angles.

This was the first time I have noticed that I parked myself perfectly in a parking spot. I wasn't 4 feet from the front, and I wasn't crooked from the side. A first! I am 40+ years old (creeping up on 50) and I have now parked straight maybe 3 times total.

I am definitely starting to perceive space in new ways.